Figure 1: Map showing location of reefs in the Whitsundays sector.

Table 1: Overview of results obtained from manta tow surveys of reefs in the Whitsundays sector

As part of the Long-term Monitoring Program (LTMP), manta tow surveys of hard coral cover and the abundance of the coral feeding crown-of-thorns starfish (COTS), Acanthaster cf. solaris* were completed on four reefs in the Whitsundays sector of the Great Barrier Reef (GBR). Preliminary results of the manta tow surveys are presented in Tables 1 and 2.

Based on the four reefs surveyed by manta tow, the sector-wide median hard coral cover was moderate (10-30%), and has remained stable since the previous surveys in 2017. The 2017 surveys were completed just before the passage of Severe Tropical Cyclone Debbie, which passed over the Whitsundays region intensifying to a category 4 system before making landfall near Airlie Beach.

Two outer shelf reefs increased in hard coral cover from 2017 levels, indicating limited impacts from Severe Tropical Cyclone Debbie. In contrast, hard coral cover declined on two mid-shelf reefs most likely due to the passage of that cyclone. Manta tow surveys were not conducted on the inshore reefs due to poor visibility. Results from scuba surveys of coral cover on fixed sites on three inshore reef (Langford and Bird Island, Border Island and Hayman Island) indicated a decline in coral cover for these reefs due to the effects of Cyclone Debbie. This was particularly evident on Hayman Island Reef where coral cover declined from 37% to 5%. A third mid-shelf reef that was surveyed by scuba only (Hyde Reef) exhibited an increase in coral cover.

Scuba surveys at fixed transects on eight reefs recorded low levels of bleaching restricted to scattered individual colonies that was most likely the result of low cumulative heat stress over the preceding summer months. No COTS were recorded during either manta tow or fixed site surveys at any of the reefs. Counts of coral disease, include white syndrome, black band disease, brown band disease and skeletal eroding band disease were low during fixed site surveys at all reefs. Densities of the corallivorous snail Drupella spp. was low on all reefs.

Table 2: Summary of manta tow surveys of reefs in the Whitsundays sector. Arrows indicate the trend in live coral cover and A. solaris since last survey; ▲ = increase, ▼ = decrease, " " = no change. Outbreak Status: NO no outbreak, IO incipient outbreak >.22 COTS per tow, RE recovering, AO = Active Outbreak >1 COTS per tow. 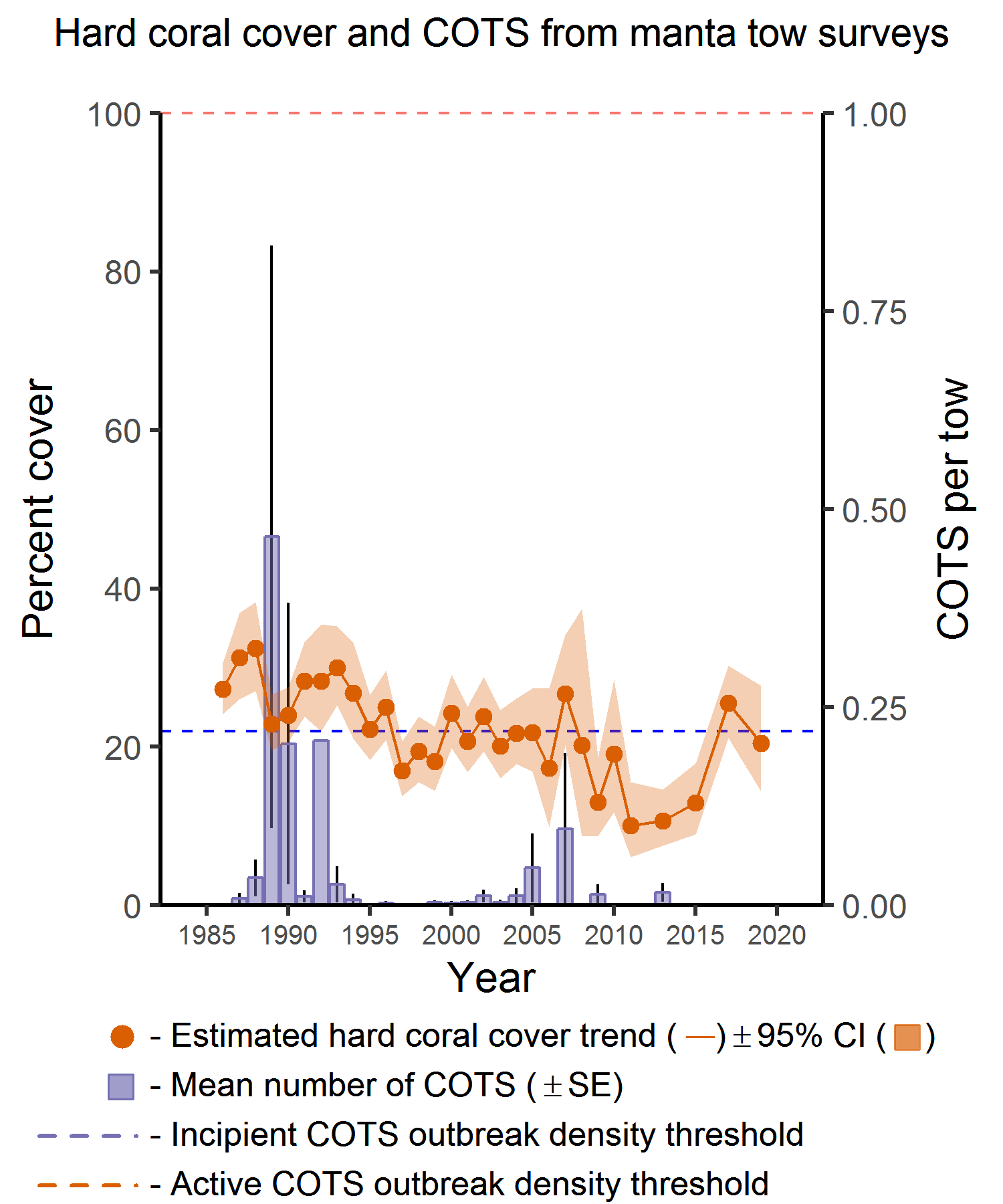 Figure 2: - Sector-wide changes in coral cover and the numbers of A. solaris for survey reefs in the Whitsundays sector of the GBR. Orange trend line = Hard coral. Purple bars = Crown-of-thorns (COTS)

Image 2: Minimal coral cover at Langford and Bird Islands, this is potentially due to storm damage from Cyclone Debbie.

Image 4: Other sections of Rebe reef showing a recovery phase.