Figure 1: Map showing location of reefs in the Swain sector.

Table 1: Overview of results obtained from manta tow surveys of reefs in the Swain sector

As part of the Long-term Monitoring Program (LTMP), manta tow surveys of coral cover and the abundance of the coral feeding crown-of-thorns starfish (COTS), Acanthaster cf. solaris* on six reefs in the Swain sector of the Great Barrier Reef (GBR) were completed. Preliminary results of the manta tow surveys are presented in Table 1 and Table 2. Median reef-wide live coral cover (coral cover) had decreased at five reefs and increased on one (Reef 21-529). A seventh reef (East Cay) was surveyed using scuba surveys on fixed transects only and showed no change in coral cover.

Declines in coral cover at four of the reefs were associated with Active Outbreaks of COTS (Table 1). Particularly large numbers of COTS (>4 per tow) at both Horseshoe Reef and Turner Cay Reef had caused catastrophic losses of coral cover from 20-30% and 40-50% respectively to 0-5% in under two years. Even large and presumably very old massive corals were being consumed by COTS on these two reefs. Coral losses at Gannet Cay Reef and Snake Reef were less extreme but are likely to escalate because COTS numbers have only recently increased; just one COTS was recorded on those two reefs in 2017, yet numbers have now increased markedly at Gannet Cay and COTS were recorded for the first time in decades during manta tow surveys at Snake Reef (Table 1).

Scuba surveys of fixed transects recorded coral bleaching on individual colonies (0-1%) on two reefs while cases of coral disease and numbers of the corallivorous snail, Drupella spp., were generally within the range of past values. COTS were recorded on scuba surveys at five reefs, reflecting the increasing reef-wide numbers seen in manta tow surveys.

Table 2: Summary of manta tow surveys of reefs in the Swain sector. Arrows indicate the trend in live coral cover and A. solaris since last survey; ▲ = increase, ▼ = decrease, " " = no change. Outbreak Status: NO no outbreak, IO incipient outbreak >.22 COTS per tow, RE recovering, AO = Active Outbreak >1 COTS per tow. 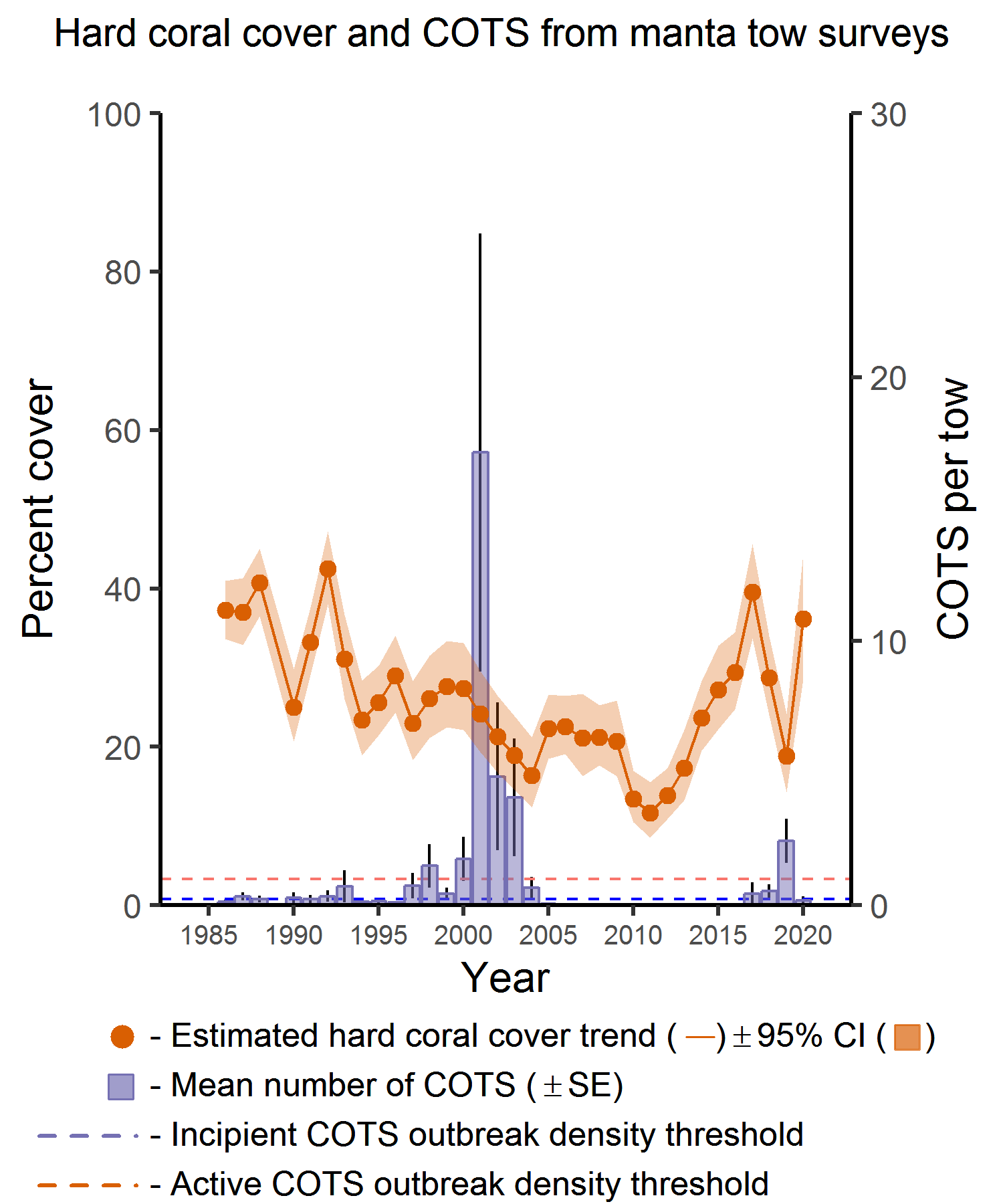 Figure 2: - Sector-wide changes in coral cover and the numbers of A. solaris for survey reefs in the Swain sector of the GBR. Orange trend line = Hard coral. Purple bars = Crown-of-thorns (COTS)

Image 2. The result of an extreme COTS outbreak at Turner Cay Reef: nearly all live corals have been eaten and the skeletons have taken on a drab brown appearance.

Image 3. A team member surveys the benthic community along transect lines at Snake Reef where coral cover was still very high in places

Image 4. Diverse coral communities were recorded at Gannet Cay but so was an Active Outbreak of COTS. The fate of this reef is hanging in the balance given the devastation COTS have recently wrought on nearby reefs. Here a COTS sits beneath a bright white plate coral skeleton, the result of its recent gorging, with a smorgasbord of preferred coral prey just beyond.