Table 1: Overview of results obtained from manta tow surveys of reefs in the Princess Charlotte sector

As part of the Long-Term Monitoring Program (LTMP), manta tow surveys of hard coral cover and the abundance of the coral feeding crown-of-thorns starfish (COTS), Acanthaster cf. solaris* were completed on nine reefs in the Princess Charlotte Bay sector of the Great Barrier Reef (GBR). Preliminary results of the manta tow surveys are presented in Tables 1 and 2.

The overall median hard coral cover for the sector was moderate (10 to 30%) but there was a small decline since last surveyed. Median reef-wide hard coral cover was low (0 to 10%) on three reefs, moderate (10 to 30%) on five reefs and high (30-50%) on one reef (Table 2). Hard coral had declined on six reefs. Hedge Reef and Reef 13-093 were last surveyed in 2013, prior to the 2016 and 2017 coral bleaching events, and the declines in hard coral cover on these reefs most likely represents impacts from the 2016/17 bleaching, although other impacts cannot be discounted. Osborne Reef was last surveyed in August 2016 and Reef 13-040 was last surveyed in January 2019 so the decline at Reef 13-040 was most likely due to Severe Tropical Cyclone Trevor in March 2019, while the decline at Osborne Reef is probably due to a combination of mass coral bleaching and the cyclone. Hard coral increased on three reefs (Table 2). Low numbers of COTS were recorded at one reef during manta tow surveys (Table 2).

More detailed fixed site surveys were conducted on scuba at four reefs and recorded low levels of coral bleaching, restricted to scattered individual colonies, were recorded. Low numbers of coral colonies with coral disease were recorded on all reefs. Similarly, there were low numbers of the corallivorous snail, Drupella spp. Coral juveniles were observed in multiple size classes at densities likely to support reef recovery. More results on fish and benthic assemblages from fixed site surveys will be available soon. 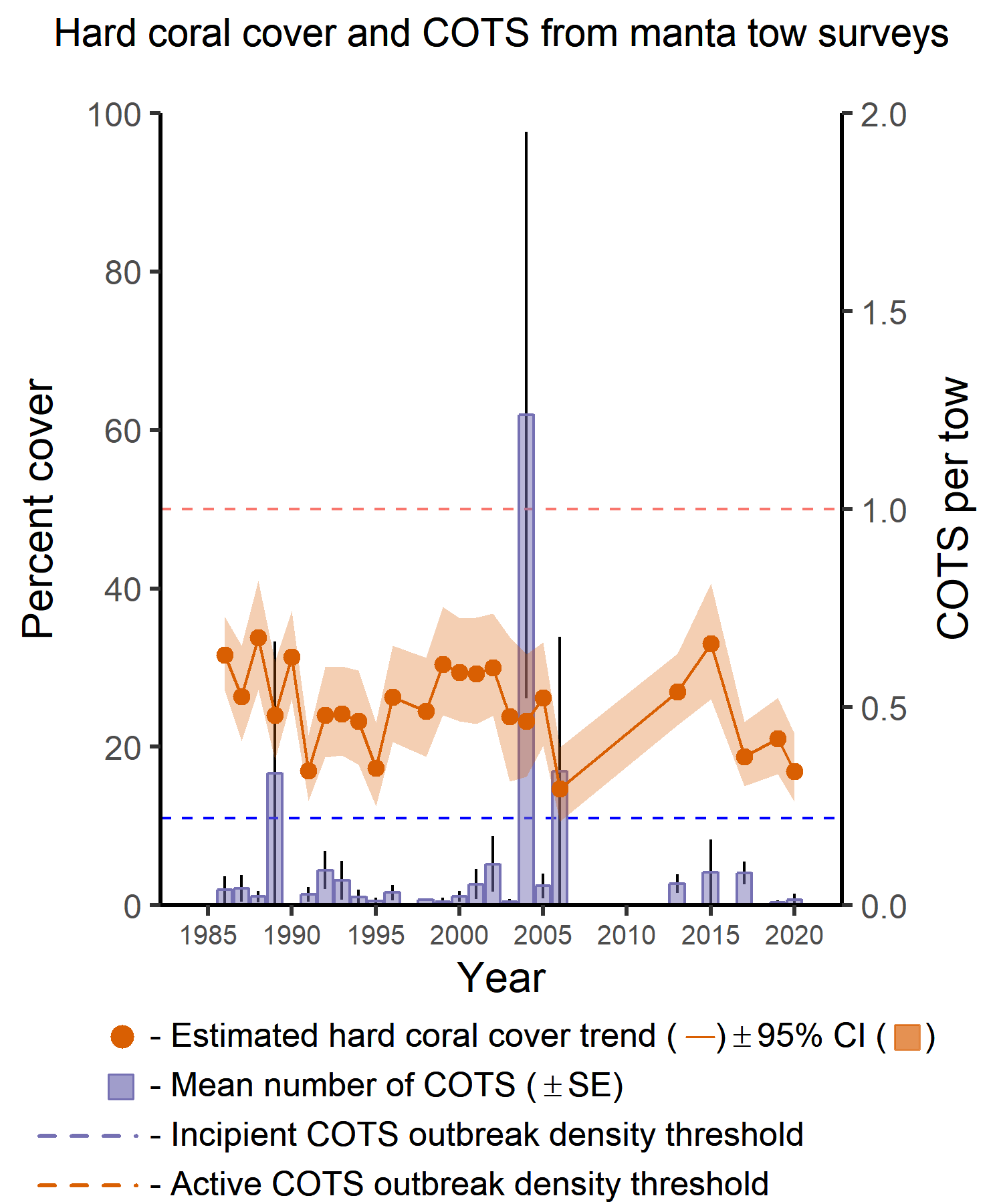 Figure 2: - Sector-wide changes in coral cover and the numbers of A. solaris for survey reefs in the Princess Charlotte sector of the GBR. Orange trend line = Hard coral. Purple bars = Crown-of-thorns (COTS)

Image 1: A vibrant and diverse coral assemblage on the back of Creech Reef

Image 3: Evidence of hard coral mortality at Osborne Reef. This likely reflects impacts from the 2016/17 coral bleaching events, along with some recent damage from Severe Tropical Cyclone Trevor in March 2019. Turf algae covers most of the reef surface, with a few remaining massive corals interspersed among dead standing coral skeletons.