Figure 1: Map showing location of reefs in the Pompeys sector. Click the points for more information.

Table 1: Overview of results obtained from manta tow surveys of reefs in the Pompeys sector

As part of the Long Term Monitoring Program (LTMP), manta tow surveys of coral cover and abundance of the coral feeding crown-of-thorns starfish (COTS), Acanthaster cf. solaris* were completed on eleven reefs in the Pompey sector of the Great Barrier Reef. Results of the manta tow surveys are presented in Tables 1 and 2. Overall, the average sector-wide live coral cover had increased (Table 1). Coral cover increased significantly on three reefs since last surveyed (Reef 20-353, Reef 21-139 and Pompey Reef #1) while a further five reefs showed a trend of increasing coral cover (Reef 21-060, Reef 21-187, Pompey Reef #2, Ben Reef and Tern Reef). Increases in live coral cover have occurred on reefs as they recover from impacts experienced over the last decade. These have been mainly due to cyclones (i.e. Severe Cyclone Hamish, March 2009, Cyclone Ita in April 2014, Severe Cyclone Marcia in February 2015 and Severe Cyclone Debbie in 2017) and COTS. For those reefs where coral cover had decreased since last surveyed, Reef 21-591 and Penrith Island Reef, declines were likely due to Cyclone Marcia and Cyclone Ita respectively. The latest surveys showed COTS activity had increased (Table 1) on reefs in this sector with two reefs, Reef 21-064 and Reef 21-187 at outbreak levels and low-level COTS activity observed on a third, Reef 21-139. Coral cover remained low on Reef 21-064 due to ongoing COTS activity but had increased on Reef 21-187 and Reef 21-139 despite the presence of COTS.

Scuba surveys of agents of coral mortality were conducted along fixed transects on all reefs except for Ben Reef. Low levels of coral bleaching, restricted to a few scattered individual coral colonies, were recorded on Reef 21-591, Penrith Island Reef, Pompey Reef #2 and Tern Island Reef. There were some cases of white syndrome coral disease on the majority of reefs and incidences were generally at the lower end of the historical range. This also the case for three other coral diseases (black-band, brown-band, and skeletal eroding band disease) that were generally absent, but where present affected only a few individual colonies. The corallivorous snail, Drupella spp. were present at most reefs and were generally at the lower end of the range of abundances recorded in previous years except for Reef 20-353 where numbers were slightly elevated.

Details of the manta tow method can be found in the Standard Operational Procedure No. 9 [AIMS Research - Crown-of-thorns Starfish and Coral Surveys - Standard Operational Procedure 9]. Further details of the monitoring program design, sampling methods and a full explanation of the A. c.f. solaris outbreak terminology can be found on the AIMS website. 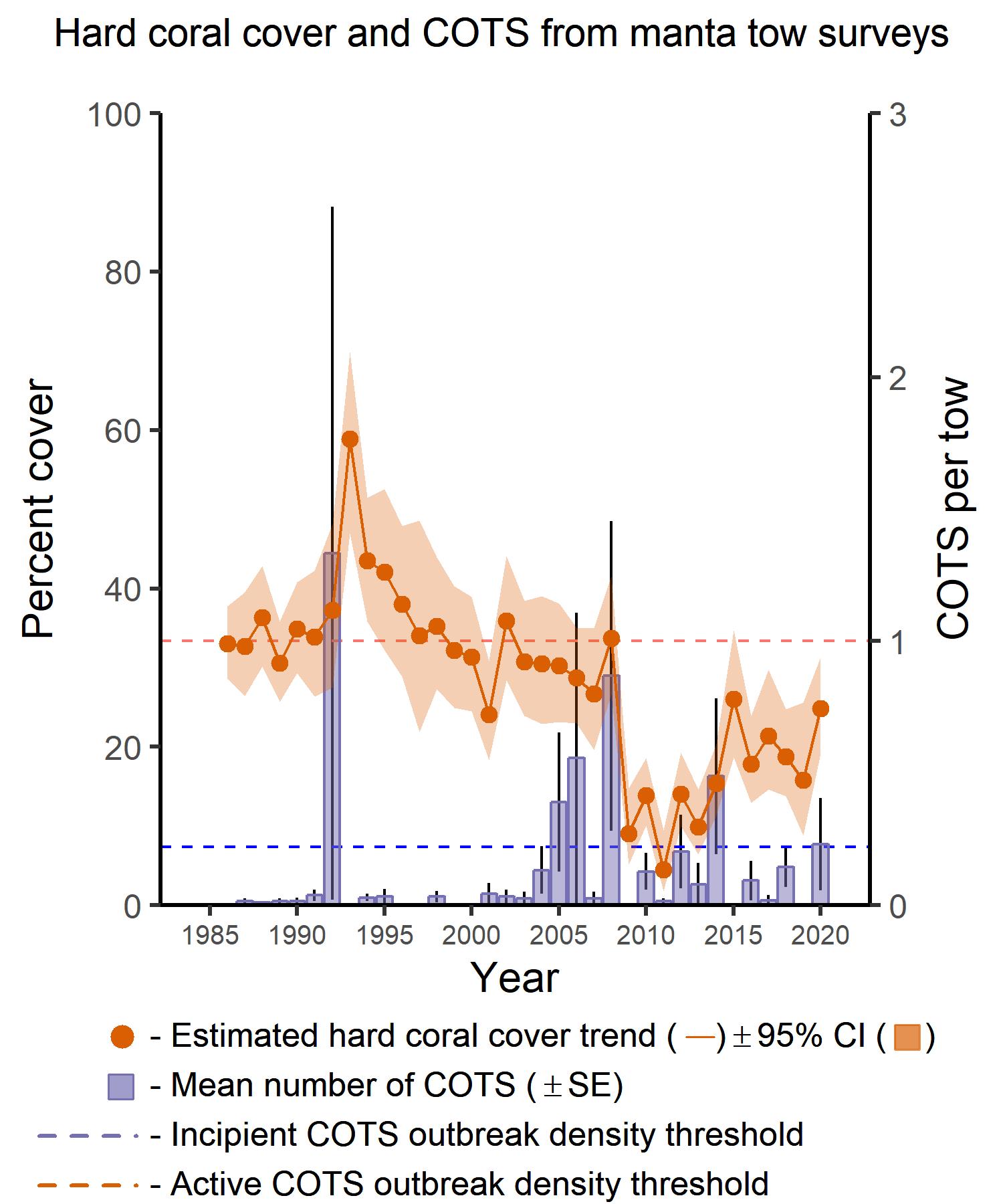 Figure 2: - Sector-wide changes in coral cover and the numbers of A. solaris for survey reefs in the Pompeys sector of the GBR. Orange trend line = Hard coral. Purple bars = Crown-of-thorns (COTS)

Image 2. Cyclones in recent years have had a big impact on many reefs in this sector. This rubble bank on Penrith Island is covered in golden noodle algae; an invasive species that is likely to impede coral settlement.

Image 3. While some reefs are slow to recover others do so more quickly. This photograph was taken on Ben Reef where coral cover is has increased considerably since it was devastated by Cyclone Hamish in 2009.