Figure 1: Map showing location of reefs in the Cooktown-Lizard sector.

Table 1: Overview of results obtained from manta tow surveys of reefs in the Cooktown-Lizard sector

As part of the Long Term Monitoring Program (LTMP), manta tow surveys of hard coral cover and the abundance of the coral feeding crown-of-thorns starfish (COTS), Acanthaster cf. solaris* were completed on nine reefs in the Cooktown-Lizard Island sector of the Great Barrier Reef (GBR). Preliminary results of the manta tow surveys are presented in Tables 1 and 2. The overall median hard coral cover for the sector was low (0-10 %) but had increased since last surveyed in 2017 (Table 1). Median reef-wide hard coral cover had increased on three reefs, but was still low. Reefs in the Cooktown-Lizard Island sector were impacted by Cyclone Ita and COTS before surveys in 2015, then impacted by Cyclone Nathan and bleaching in summer of 2015/2016 after surveys in 2015, which reduced hard coral cover to low levels (0-10%) by 2017. The small increase in hard coral cover recorded in 2019 indicated some reefs were in the early stages of recovery. Hard coral cover had declined on Sandbank No. 1 Reef since the previous survey in 2005 to moderate levels (10-30%), yet it had the highest coral cover for the sector in 2019 surveys (Table 2). Due to the long period between surveys the cause of this decline was not clear, but may have been due to coral bleaching between 2015 and 2017 and/or storm damage. No COTS were observed on manta tow surveys, but very low numbers (two individuals) were recorded on Lizard Island Reef.

Fixed site surveys and broad-scale manta tow surveys recorded low levels (0-1%) of coral bleaching on all reefs. Coral disease was low on one reef and rare on the other six reefs. Disease of coralline algae was present on four outer shelf reefs and was notably higher than on previous surveys. Low counts of the corallivorous snail, Drupella spp. were recorded. Coral juveniles (small corals less than 5cm diameter) were observed on broad-scale manta tow surveys and on fixed site surveys at densities likely to support future reef recovery.

Table 2: Summary of manta tow surveys of reefs in the Cooktown-Lizard sector. Arrows indicate the trend in live coral cover and A. solaris since last survey; ▲ = increase, ▼ = decrease, " " = no change. Outbreak Status: NO no outbreak, IO incipient outbreak >.22 COTS per tow, RE recovering, AO = Active Outbreak>1 COTS per tow. 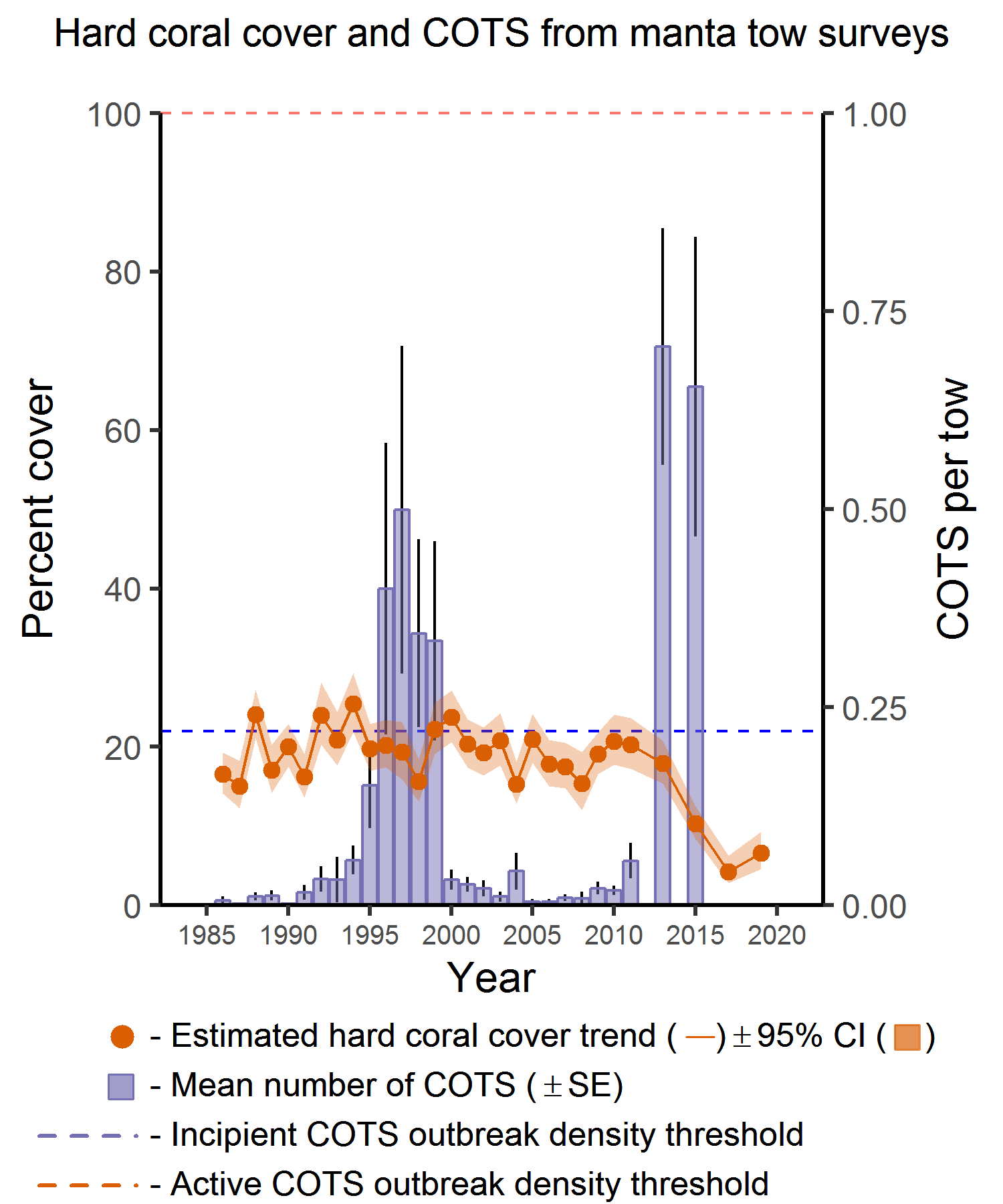 Figure 2: - Sector-wide changes in coral cover and the numbers of A. solaris for survey reefs in the Cooktown-Lizard sector of the GBR. Orange trend line = Hard coral. Purple bars = Crown-of-thorns (COTS)

Image 1. A view of the reef slope showing corals from a number of size classes. The largest corals most likely survived the severe bleaching events in 2015/16 and 2016/17, while the smaller corals are those which resulted from coral spawning events after the bleaching. The regeneration of coral populations has led to small increases in coral on some reefs.

Image 2. A view of the reef crest showing ridges, which are the dead standing skeletons of former living corals (Isopora spp.), that probably died as a result of the severe bleaching event in 2015/16 and 2016/17. There appears to be some regrowth of small colonies in the valleys between ridges.

Image 3. Porites corals dominate this scene from a mid-shelf reef. These corals are typically most resistant to coral bleaching and the colonies seen here have survived recent disturbances.