Figure 1: Map showing location of reefs in the Cairns sector.

Table 1: Overview of results obtained from manta tow surveys of reefs in the Cairns sector

As part of the Long-term Monitoring Program (LTMP), manta tow surveys of hard coral cover and the abundance of the coral feeding crown-of-thorns starfish (COTS), Acanthaster cf. solaris* were completed on fourteen reefs in the Cairns sector of the Great Barrier Reef (GBR). Preliminary results of the manta tow surveys are presented in Tables 1 and 2. The overall median hard coral cover remained low (0-10 %), as per the previous survey report in 2018 (Table 1). Hard coral cover declined on nine reefs and remained stable on five reefs. Declines were mainly due to coral bleaching events in the summers of 2016 and 2017. Outbreaks of COTS may also have contributed to declines (Table 2). However, because COTS control has been active the contribution of COTS to coral decline is difficult to measure accurately. No COTS were observed on manta tow surveys in 2019.

Scuba surveys at fixed sites (ten reefs) and broad-scale manta tow surveys recorded low levels (0-1%) of coral bleaching on all reefs. Coral diseases including white syndrome, black-band disease, brown-band disease and skeletal eroding band disease were rare at all reefs. The density of the corallivorous snail, Drupella spp., was moderate at Hastings reef (287 per hectare) and very low on the other reefs where scuba surveys were conducted.

Table 2: Summary of manta tow surveys of reefs in the Cairns sector. Arrows indicate the trend in live coral cover and A. solaris since last survey; ▲ = increase, ▼ = decrease, " " = no change. Outbreak Status: NO no outbreak, IO incipient outbreak >.22 COTS per tow, RE recovering, AO = Active Outbreak>1 COTS per tow. 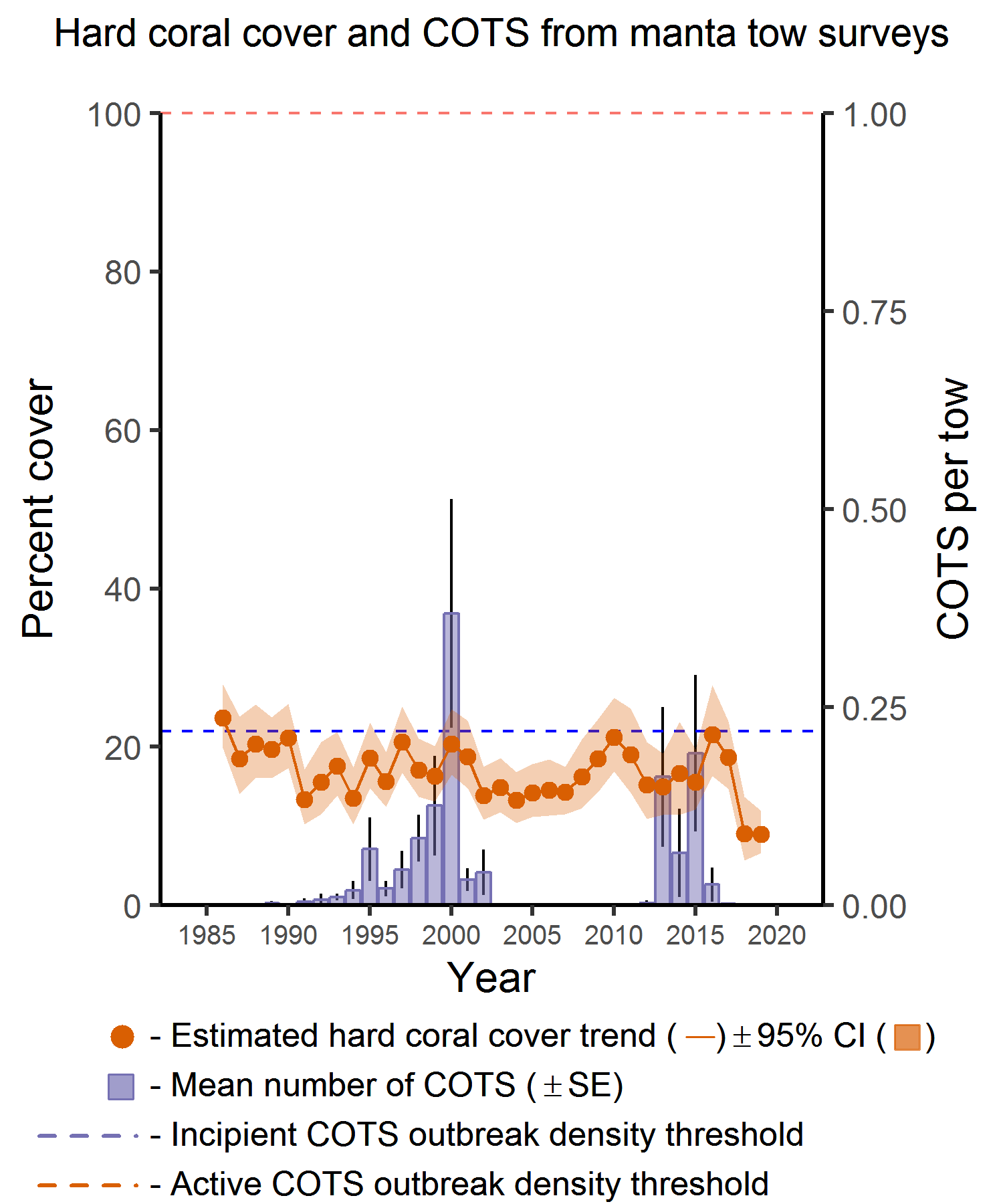 Figure 2: - Sector-wide changes in coral cover and the numbers of A. solaris for survey reefs in the Cairns sector of the GBR. Orange trend line = Hard coral. Purple bars = Crown-of-thorns (COTS)

Image 1. A sprawling stand of dead branching Acropora spp. on the reef slope. The branches are covered in a layer of turf algae. These corals most likely died as a result of bleaching in recent summers (2016 and 2017).

Image 2. Many young coral colonies, particularly digitate and tabulate growth forms of Acropora spp., scatter the turf-covered substrate of the reef slope at Andersen Reef. Among them are numerous dead coral colonies covered in a dark layer of turf. These corals probably died from bleaching in 2016 or 2017.

Image 3. A stretch of the reef slope at Hastings Reef where tabulate and branching growth forms of Acropora spp. are thriving.